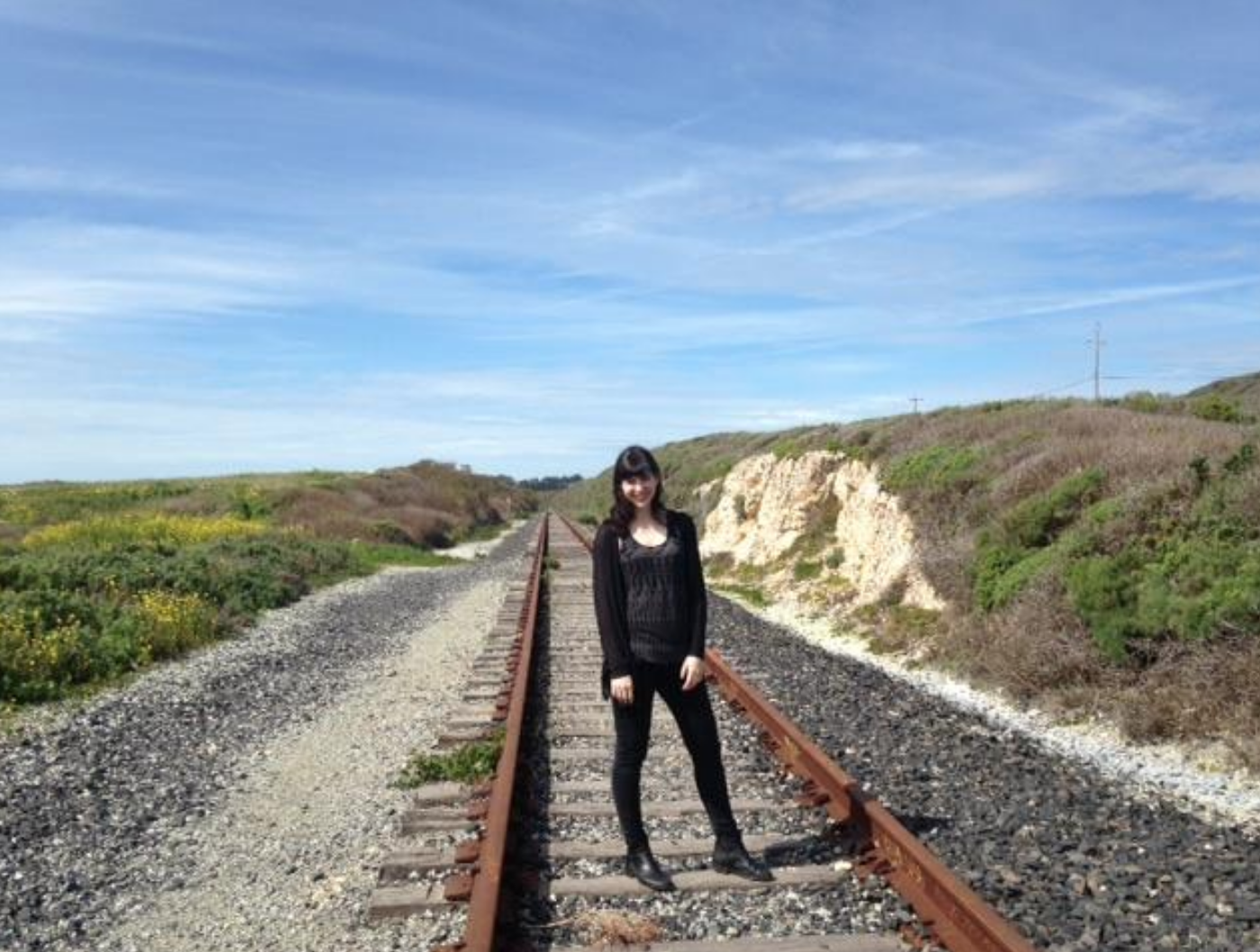 “Enjoy the cornfields!” the jovial chap who checked my suitcase at PDX called out after me and here I am, 24 hours later, sitting in the lounge of Possum Hollow Log Cabin in rural Ohio. I look out the window in both directions and see nothing but trees and corn fields. It’s eight below zero degrees in the blazing sunshine.

This is my first America tour: 21 shows across four weeks and five States. With 12 shows behind me, nine to go and a day to kill before tonight’s show in Columbus, I thought I’d take some time to reflect on the West Coast part of this adventure. Securing the 0-1 Visa for this tour could easily occupy the entire post, so perhaps I’ll save that fun for another time. As it stands, I am officially an alien of extraordinary talent and yes, I do intend to print business cards.

I didn’t expect to enjoy LA as much as I did. Perhaps it was the fact that we didn’t hang about – with a meeting in Burbank the next morning and a show at Hotel Cafe the following night, it felt like America knew I meant business. We were there for Oscars night and witnessed the embarrassment of self celebration gone awry. We met people who embodied all the cliches LA has to offer. We stayed in rough corners of the town with tiny wooden houses clinging to steep hill sides and we drove through Beverly Hills where every house sparkles with palm trees, gateways, fountains and statues. America is a country of such stark contrast and LA is a heightened version of it.

The first show was really great fun, not least because the sound at Hotel Cafe was amazing and I got to see a couple of familiar, friendly faces I hadn’t seen in ages! We shared the bill with Nashville based Annie McCue. By pure coincidence, we shared the bill again the following day, three hours north of LA at Sculpterra Winery up in Paso Robles. Large state, small world. After a somewhat hazy night in a weed cupboard (true story), we zoomed back down to LA to host the FAC’s first Open Artist Session in the US at Gibson Showrooms with Dave Stewart (my life too is full of contrast it seems). It had been fairly hard work organising this Q&A from afar and I was so relieved we managed to pull it off, not least to the kindness of Gibson hosting us and to Dave Stewart’s fantastic stories. Some days it’s strange to think back to the morning, when you were in a completely different universe to the one that’s tucking you in at night. This was definitely one of those days. The little bit of LA magic continued the following day, where we got to perform for the staff at BMG in their office. The email I got from my publisher that morning read: “they are throwing you a pizza and beer party!” I mean, could things get any better?

I remembered the view from that 16th floor well. I had been there two years ago for a meeting where the person I was there to meet showed me around and with a sweeping movement of his right arm across the empty room said, “you should come back and perform for us here next time”. And so I did. With pizza. And beer. And a sunset. Our LA adventures ended with a show in South Pasadena the following evening. I still can’t quite get my head around how spread out this city is. It’s really not a city at all. Apart from downtown, it’s more like a bunch of suburbs, grouped together by a common area code. Each area has its own character and every day was a new adventure. We rolled up to the venue and I said: “Huh! I guess we’re playing at a golf club tonight!” You just never know what to expect… The Wine and Song Concert Series is located next to the golf club’s diner and boasted a nice little stage and a room full of incredibly friendly people. Half way through the set, I said something along the lines of, “if our audiences on this tour are as attentive and lovely as you..”
“They won’t be! We’re the best!”, a lady in the front row shouted out.
Alright then. California is so beautiful. We drove through miles and miles of farm land, coast lines, even oil rigs and mountains. It’s so vast and so empty. With no CDs or MP3s to keep us company, we turned to the few radio stations available. It was either country pop, Jesus Pop or the news on trump’s latest shenanigans on public radio. My clear favourite song was a cross-over of the country and Jesus pop, entitled: “If I could have a beer with Jesus”. We listened to an in depth radio piece on how farmers who voted for Trump are now realizing that his policies would mean they lose the vast majority of their workforce. After only a couple of days in California, it’s pretty easy to see that the farming, restaurant and service industry are largely reliant on immigrants from Mexico.

Our most rural show also wins the award for most whacky adventure. The Last Stage West is a large restaurant where BanjerDan hosts music. On arrival, BanjerDan told us its his policy to not listen to the music he books beforehand and that part of the night was for us to play a 45 min set together with him on Banjo.. so yes, that happened. Having exhausted our common musical ground pretty quickly, we even played a country song (I did know those three chords, but was instructed to play them less happy), Hank Williams it was… yes, that happened too. We spent the night listening to conspiracy theories and Beatles music, an odd combination. I did however see stars. So many of them. I don’t see well and am used to spending time in places that have light pollution, so the Atascadero night sky was pretty spectacular. The following day led us through redwood forests and down to a small mountain town called Boulder Creek. We performed at a beautiful, tiny venue called Lillie Aeske and felt so at home. This little place is a sleeper town (or a commuter town if you’re from where I’m from) for the folks at Silicon Valley and is a tiny Island of liberalism a with cool coffee house and lots of little art galleries. I left a tiny piece of my heart in Boulder Creek and hope I get to go back to collect in one day. Thank you so much for taking such good care of us! The next stop was an afternoon show right by the sea, at a holiday resort in Moss Landing. It felt a lot like traveling back in time to the 1960’s, from the decor of the venue to the little holiday apartment we got to stay in. I got to meet some really lovely people there and would definitely go back again. After Moss Landing, we drove up to the Bay area to play our first house show of the tour. We were hosted by a really lovely couple in Oakland and had a full house (ha, that’s a San Francisco pun there, a bad one… sorry!) of 40 guests. I loved this show, thank you so much to everyone who came along and to our hosts for being so amazing! We were treated to a pretty epic BBQ dinner after the show and were given a guided tour of San Francisco the following day. I felt pretty at home there and would love to spend more time there next time. The next couple of days were spent in Santa Cruz with the amazing Nels Andrews, whom I met at Folk Alliance. Look how beautiful the coast is! The show in Davenport (just outside Santa Cruz) was in a large restaurant right by the coast. Perhaps not the best venue for live music, but we were well looked after and, above all, I got to share the bill with Laura Meyer (Cygne). Laura and I met in Coventry six years ago when we were paired up to play at the Kasbah. We stayed in touch ever since. With a tour schedule of about 200 shows a year, she’s been a major inspiration for me and helped me brave life as a full time DIY singer / songwriter. I was so pleased to share the stage again and hear her play live again. I wonder where we’ll share the bill in another six year’s time…

14 hours. It takes 14 hours to drive from Santa Cruz to Portland, at least if you want to do the first half of the drive along the coast road. It started to rain the second we crossed the state border: Welcome to Oregon. We were chasing the sunlight at this point, trying to get over to highway 5 before dark. Winding up the redwood covered mountains, I looked down upon gushing waterfalls, flowing into turquoise streams. Portland is everything you might think it is. Every household wears positive sentiments on its sleeve, with signs ranging from “Black Lives Matter” to “Let’s please love one another” to “humans of all colour, orientation and beliefs welcome here”. There is an abundance of book, vinyl and coffee shops, great restaurants, recreational cannabis shops and my little ponies tied up to the metal rings on the curbs, where slightly larger, real horses used to roam. Our show was at The Ranger Station, a bar on a street lined with second hand clothing shops and doughnut places. My cousin Myles de Bastion set up his LED lights created in his hub CymaSpace, a not for profit that aims to create music events that both the hearing and non hearing can enjoy. The LED lights are programmed to translate the sound into colour, matching pitch and aptitude to a certain colour spectrum. I was really pleased we were able to do this and to finally work together with CymaSpace. We got to explore Oregon a bit more with shows in Dallas and Astoria. The former was one of my favourite venues of the tour, with a really great stage and sound system and a lovely audience, the latter was in a great big brewery, right by the beautiful and very rainy coast. We had a while bunch of people jump up to dance in front of the stage for Red & White Blood Cells – wish I could have filmed that. Our flight left PDX at 5:20am in the morning and that brings us back to the beginning of this post and back to Ohio. Here I am, looking forward to the next chapter in this adventure. Thank you for reading this and for keeping in touch with me. Thanks for everyone who had us play and to everyone who put us up and helped out. Columbus, here we go!

6 Replies to “Ramblings from the Road (USA edition) – West Coast”