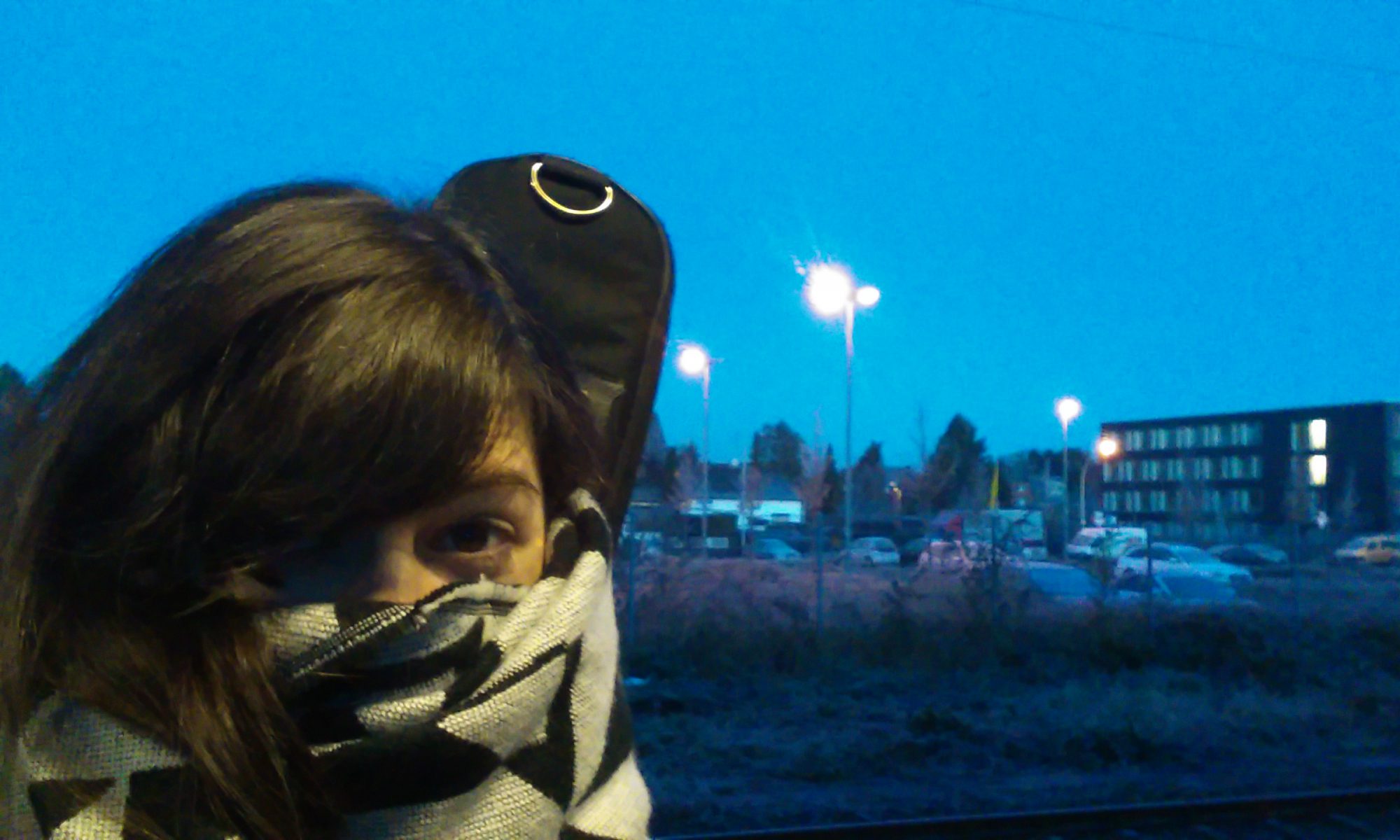 I’m hiding out in a vegan cafe in Wiesbaden. After a rather harsh 6am start this morning and a five hour train journey, it was still morning when I arrived at tonight’s venue: left activist space, the Info Club. The space looks lovely. There’s a large banner above the bar that reads “no human is illegal”. There are several guitars and other stringed instruments tucked away in the stage corner and even a little upright piano. I will play it tonight, despite it being slightly out of tune (it’s still on the charming side of out of tune). With hours to kill, I found my way to this little gem of a cafe, where I’m sat in an easy chair by the radiator. I’ve been here for nearly four hours, but no one seems to mind. I am so tired, I could easily fall asleep if I leant back and closed my eyes… but let’s not do that. Tonight is the fifth show of this little Germany winter tour. So far, everything has gone super smoothly.. maybe touring Germany slipped into routine while I wasn’t looking. I must admit, I am somewhat going through the motions. It’s been such a great year, I feel I should be in bed, gearing up for the next one, but here I am, playing small mystery venues again, the lovely living room shows, sitting sleepily on trains and waiting for sound checks and stage times. As familiar as this feels, the country and its customs are becoming less so… the cultural differences, both positive and negative, are all the more apparent to me. I do not believe in nations and borders and yet, here I am, feeling more English than ever. I’m not used to the passive aggression of the German language anymore, especially that of train conductors. Society is not on such a short leash here though and that, I love. People are treated as grownups, not micro-managed like back at home. You can open a can of beer on a coach here, because it’s assumed you can handle your drink and will be responsible. You’re not told to stand on the right side of the escalator and are not constantly reminded by a pre-recorded voice that you’re being watched by leering lenses, the CCTV that’s littering my current home, London.

Another thing I’m not used to anymore (or never was) is the bitter cold. It was eight degrees below zero on the morning after the first show. I was waiting for my train from Grevenbroilch to Frankfurt at eight in the morning, but it felt like the middle of the night and those twenty minutes felt like hours.

Today’s news headlines tell me that the CIA has concluded that Russia did indeed have a hand in the US elections. As 2016 draws to a close, it is clear that it has certainly earned its space in the history books. Brexit, Trump, walls, borders, fear and tension… It can all feel a little overwhelming as we look with suspicion and an uneasy heart towards the next twelve months. It is not all bad though. I feel the paranoid headlines are at stark contrast to my personal experience. I keep meeting people who are dedicating their life to making their part of the world a better place. In Berlin, I performed at the new community space, Das Baumhaus. Food that would otherwise be thrown away by super markets are donated, prepared by volunteers and served as a ‘pay what you want’ buffet. I learn that Mohamed, who sat listening intently for the entire duration of my show, is currently homeless, but still has a place to come to for food and culture.

Here in Wiesbaden, Info Laden host events for refugees, where volunteers teach German, do readings and workshops. Yesterday in Jena, strangers took it upon themselves to help me pack away all my things after the show and walk me home to my hostel. At the two private shows in West Germany I shared food and stories with strangers who are all looking for positivity, for togetherness, over music and cookies. People talk to me about their love for John Lennon, for their views on the EU, for their hopes and thoughts on the future. The world is a wonderful place, don’t let the headlines scare you. Fear sells, we just shouldn’t buy into it.

Back to more material matters… I’ve officially sold out of all my CDs. Last night, the lovely lady who helped me pack up my things and passed the hat around again because she thought I should earn more for the night’s work, bought the last copy of my Seeing You EP. I’ve really been enjoying playing my new piano songs on this tour. I am so happy with the album I’ve recorded and just can’t wait to share it with you. Three more shows to go, unfortunately no CDs to sell, but songs to sing and people to meet. Bring it on, Info Laden, let’s see what you’ve got (I better get out of this easy chair now anyway).