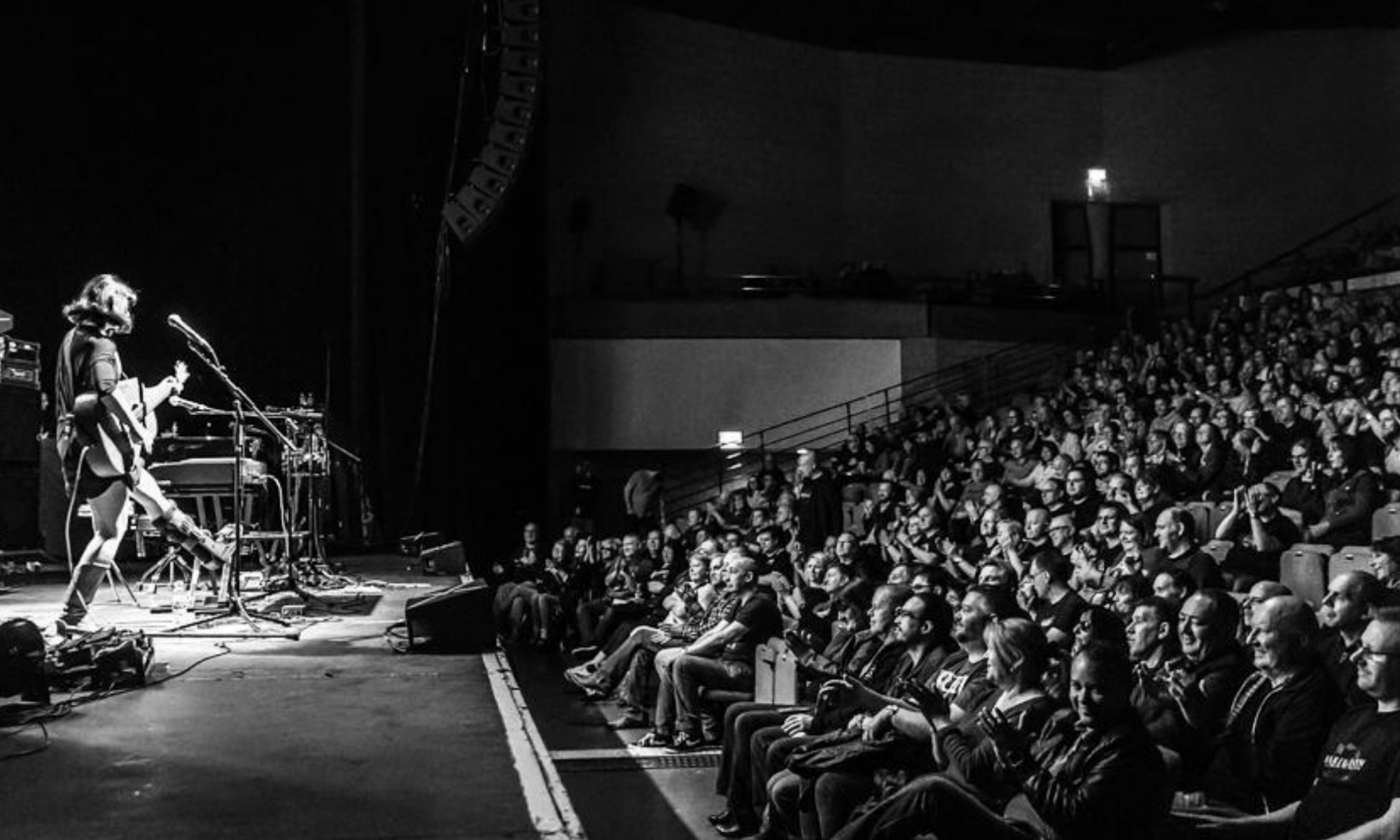 Remember when I opened for Marillion on crutches?

Sometimes you can feel moments turn into memories. The premise to this particular savings deposit in my memory bank was quite absurd. I had a fractured ankle, two torn ligaments and the opportunity to play four of the largest shows for me to date. Knowing the opportunity was way too good to pass up, I spray painted my crutches red, called virgin trains to pre-book assistance (which is free, but as it transpired, not super reliable) and braced myself for a tough and exciting week. I couldn’t wait to play in 2000 capacity theater venues for the first time and terrified at the prospect of doing so on crutches and one foot. A fellow passenger had helped me get my guitar and suitcase off the train. A kind, but slightly impatient member of staff helped me to a taxi. The taxi driver explained to me that Gateshead is not in fact Newcastle and that that would be important for me to get right as part of my stage talk. We made a little stop outside a music shop so that I could pick up a new lead for my guitar.

“Bloody Hell, Mike, she’s opening for Marillion tonight!”, said the one guy behind the counter to another.

“That’s going to be great! Muso’s paradise, that!”, said the other to me.

They both wished me good luck as I hobbled out of the shop and back into the taxi.

“Over there! That’s the Sage..”, the taxi driver pointed towards what looked like an enormous white tent-like building looming over the other side of the river bank.

He very kindly carried my guitar and suitcase into the venue and wished me good luck before reversing out of the drive and back over the bridge.

Venues this large are totally new to me. I feel a wave of excitement as I’m guided through corridors, up a goods lift, down more corridors, which are lined with flight cases until we turn a final corner and I’m introduced to Frenchie, Marillion’s tour manager. I’m invited to grab some dinner from catering (“Well, there’s only one of you!”) and I’m amazed that there is catering (back down in the lift and around another couple of corners), complete with menu with meals for you to choose from. I could definitely get used to this. Stage time comes around very soon. I’m still trying to figure out how to clip on the in ear monitors on my dress (which was another first – never performed with in-ear monitors before) when the house lights are dimmed and one of the many, many stage techs shines a light to the stage with his torch. The walk to the microphone on crutches takes a perceived eternity. I was really touched by how many people were already seated and ready to listen. The hall was way more attentive than I expected and I was super grateful for the kind reception, particularly as I felt so rusty and one-legged. Truth be told, that first show was super difficult… I hadn’t considered how much energy it would take to simply not fall over and I hadn’t thought about lots of little details, such as how on earth I was going to hit the tuning pedal. It definitely couldn’t have been my most graceful moment on stage, but I made it through. As I hobbled off stage and towards my dressing room, I felt a little overwhelmed and that I hadn’t done a particularly great job. My immediate reaction on was to slouch down into a chair and rest head in hands. I picked myself up after a minute and headed out to the merch stand.

“Your albums are going like hot cakes!”, said the woman who was looking after sales. I had sold out of CDs and Vinyls by the end of the night and got to meet loads of wonderful people. Thank you to each and every one of you for all your kind words and for figuratively lifting my head out of my hands.

WE FILLED THE LEXINGTON! One Marillion show down and three to go, but not before my largest headline show to date at The Lexington in London. This was the official book launch show for Tales From The Rails; a full band show with new visuals and a new song. There’s always such a massive build up to these shows, they loom in the diary and you work hard to promote, rehearse and then it’s all over in flash. Although this show is already nearly five months ago, I still can’t believe we managed to fill the Lexington on a Monday night and I’m so grateful to all of you who came along to support and to the amazing musicians I shared the stage with (especially Joel Harries who filled in on drums last minute! Waiting backstage really isn’t too bad when you’ve got a comfortable sofa, a wifi network and snacks. This time around, I felt slightly more steady on my crutches and a little more familiar with the in-ears. Singing with in-ears feels much more insular, but also more precise. You somehow feel less connected to the room, but can therefore immerse yourself more in the performance. At the first show, I didn’t get on with them well at all, but in Reading I started to think that there might be something to it. I loved performing for you at the Hexagon, I felt much more myself and once again felt super grateful that you were all so attentive. I also saw Mark (who plays keys in Marillion) sit in the audience to catch my show, which I thought was very kind indeed. Getting to and from the venue would have been difficult. Luckily, Andrew (who’s an excellent living room show host) came to the rescue, picking me up and dropping me off. I ended up missing my train back (just catching the last one back to London), which meant I was on the same train as quite a few Marillion fans, so was in good chatting-company for the ride home. I was a very happy, limping musician when I finally crawled into bed that night. Playing at the Liverpool Philharmonic Hall was on my adopted-scouse-heart-bucket-list for sure. I arrived at the venue to hobble down the usual, school-like corridors, bustling with stage techs, rolling flight cases to and fro. On stage, it felt somewhat surreal to see familiar faces in the front rows, the setting being somewhat grander than my usual Liverpool shows. Oh, and obviously I didn’t get asked anywhere other than Liverpool whether the choice of colour for my crutches was football related… I’ll let you answer that one yourselves.

By now, I felt I was mates with some of the stage crew and Rich & Sarah, who were taking care of my merch for me. It really was amazing to see how many hands are required and how much work goes into making shows of this size happen (rest assured, Marillion have an entire 15 minute prog-exravaganza dedicated to their team as part of their set). It was a total luxury to have someone role up cables and keep track of sales… By the end of show three on this tour I was already wondering how I’d cope without. I might not find the stage ever again without  having someone in a black t-shirt shine a light to pave the way. After a day off in Liverpool, spent having cocktails for breakfast and watching Thom Morecroft play a set for record store day, we were off on the next train, this time across the country, to beautiful York. This was not just my last show with Marillion, but the final show of their tour. It was sold out and almost everyone was seated when it was my turn to hobble onto the stage. I enjoyed every second of that show. It was one of those rare nights where everything comes together. Five months on, it’s still hands down the best show of 2018 in my books and will probably take some time to knock off pole position. Looking back, it seems mad to have pulled it off, and it certainly wasn’t without difficulty and odd moments, but most things are possible with a friend or two, an opportunity given and a shot of whisky.

I feel really lucky to have met all you lovely people – thank you for buying my album and for keeping in touch. Here’s to many more shows in grand halls, to perfectly rolled up guitar cables and audiences as great as you. THANKS A MILLION, MARILLION! One Reply to “Tales from the Rails – touring with Marillion: Crutches, Cables and Flight Cases”