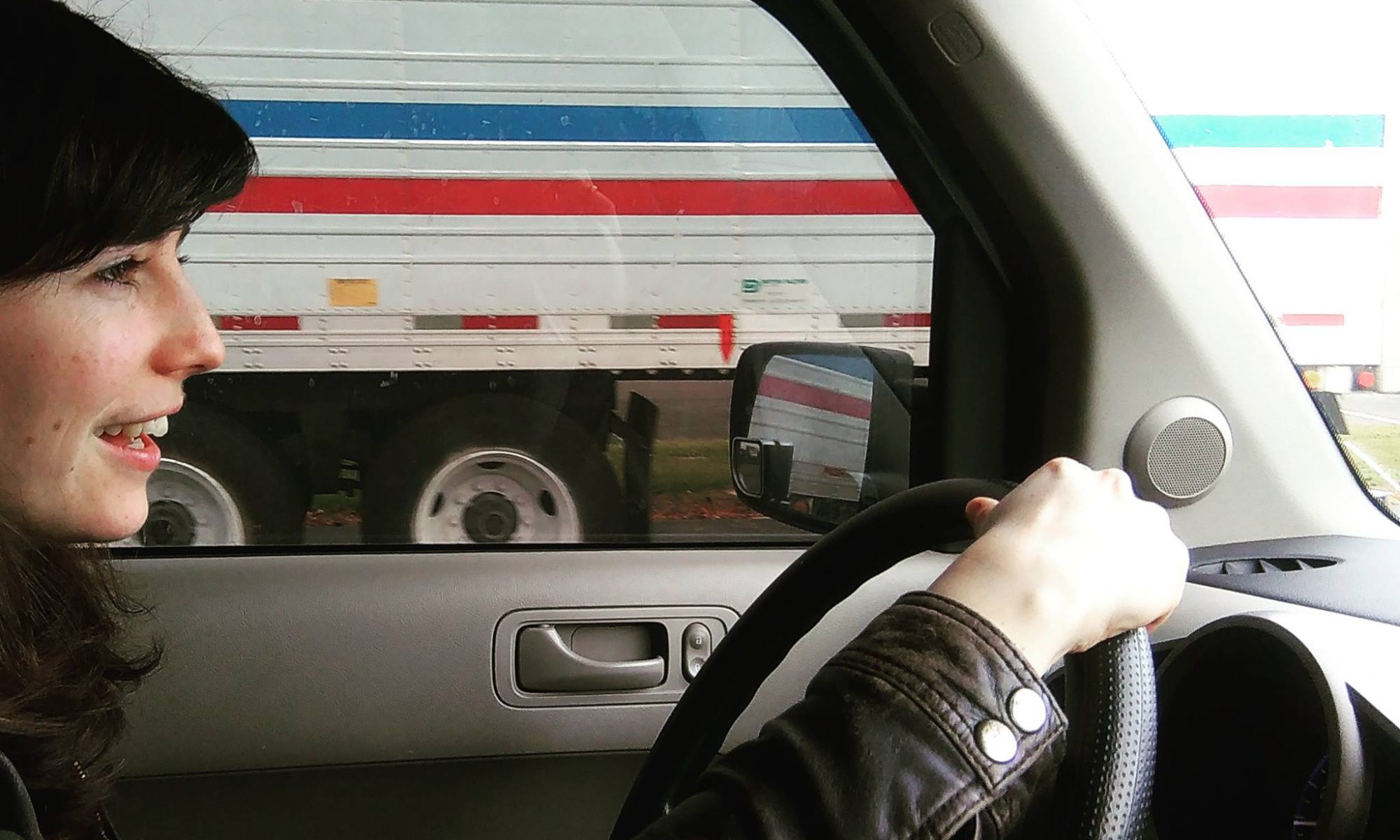 We had rolled up to the US border between New Brunswick and New England and my heart immediately started beating faster. The line of questioning was carried out in the usual harsh tone of voice. The more routine questions were followed by a very suspicious “How do you guys know each other?” as the guard waved his index finger back and fourth between Denis and I and, finally, “What’s all this?”, as he opened the back of the van, referring to the pile of gear: the PA, the keyboard, the guitar, the suitcases and various boxes full of cables, microphones and merchandise.

It was apparent that he wasn’t in the mood for taking the van apart and, after a couple more quizzical looks and perusing of papers, he said “alright then” and waved us on, as if he’d generously let us get away with something. No welcome to the USA, no have a good day and I can’t understand who and why someone sent that memo out.. “be as nasty and difficult as you can to all humans passing through the border”.

The sour experience was quickly washed away by the New England countryside. The guard may not have welcomed us, but the the reds and oranges of the trees washing by our window did. Everyone had said that I’d picked a good time of year to be in this corner of the world and they were right. I think we drove for five hours that day and stayed firmly set on the Beatles radio channel for the duration of the trip. I don’t watch much TV, but recently caught up on the entire series of Gilmore Girls – perfect timing, because now every little New England town we drove through looked just like Stars Hollow and my coffee intake is always worthy of a Gilmore.

First point on the agenda in the USA was to track down my red boots, which I had had shipped over. This may seem slightly over the top to some, but I insist that it was totally worth it and the right thing to do. We ended up picking them up from Mike, the local mail man’s house, for he was off sick that day but said we could come over. The way we were talking about the importance of the package, I’m pretty sure he thought it contained drugs or other illegal cargo. He did nervously ask; “Hey, if you don’t mind me asking, what’s in the package?” as I walked away from his log cabin and back towards the van. He looked bewildered at my reply. It’s fair to say Mike didn’t quite get me. Reunited with my boots, I was ready to tackle the second half of the tour. The most ‘out there’ show of the tour was, well… way out there. Where? Exactly. Any touring musician will have had at least one of these experiences. That moment when you’re convinced you must have taken a wrong turn or two because, surely, this can’t be right? We drove further and further up into wooded mountains, distances between houses getting wider and reception getting worse until the last bar had vanished off my screen and even the Beatles radio channel gave up, the static noise now only punctured with the occasional “yeah” from McCartney. We had not taken a wrong turn. We finally rolled up to the rather eccentric looking holiday resort for mountain bikers. I was to perform in a yurt that night. It was cold. Fun, but cold. A highlight of the New England stretch was my mini show at the Lizard Lounge in Cambridge, Massachusetts. On arrival I had mentally prepared myself for battling against a noisy pub crowd, but I was proven wrong very quickly. The audience was incredibly kind and I felt like I made some new friends. Another clear favourite was the house show in Rockport, a quaint little sea side town. The hosts did an amazing job at organising a concert in their beautiful home at relative short notice and filled their living room with a crowd spanning three generations, all equally interested and inquisitive (the little ones more so for Red & White Blood Cells..). You can always feel the degree to which people are listening to the stories told in the songs and on this occasion, everyone in the room was listening so intently, I felt like we were all living through them together. It really was quite special. Stormy weather hit Rockport that night, but I fell asleep easily. When I awoke, the electricity had gone and large trees were strewn across streets. Not that I noticed any of that… the only thing that tipped me off that the wifi wasn’t working (priorities). The moment we arrived in Brooklyn my heart felt lighter. It hadn’t been long since I’d last visited and yet I felt very much a different person, walking down that same street in Glendale. We were greeted by blazing sunshine and weather too warm for November. I was playing a show at Rockwood Music Hall that evening, so more familiar ground and familiar faces to look forward to. I love that little venue and had a great time performing – thank you to everyone who came along to see me play.

We were going to have a bit of time to ourselves, New York and I, but first I had two more shows to play, one in New Jersey and one in Pennsylvania. Both were house shows and both were incredible and a worthy finale to the tour. I knew I was in for a great night when I walked down the wooden staircase into the performance room in New Jersey. Lisa is a Beatles fan. I mean, she’s a Beatles fan like I am a Beatles fan… “Oh I didn’t buy most of that stuff”, Lisa explained as I perused her shrine, “When it’s known that you love the Beatles so much, this stuff just sort of finds its way to you”. Having just been presented with a special edition version of Paul McCartney’s “New” album at my show in NYC by the lovely Patricia (Paul’s publisher!!!), I could relate. I’m not sure what bought me more joy – playing a show for a lovely crowd of about 50 people, or listening to Lisa’s story of when she got to meet Paul McCartney. The excitement of the event still fresh in her smile even though she had clearly told the story a million times before (if I ever I get to have a story like that, I wouldn’t tire of telling it either). Here’s lovely Lisa, posing with a picture she drew as a six year old! I just love how she nailed John Lennon’s stance and how much foresight did this six year old have to draw George playing a sitar 😉 I feel so lucky when I get to perform to a packed room in a city where I’ve never been before. These types of house shows are such a joy and I’m glad to have been invited by both Pete and Lisa in NJ and the Lehman’s in PA. The guests know and trust the hosts and are happy to go along to a show, regardless of who’s booked in to perform that night. It’s such a great thing to do, not only supporting touring musicians, but also creating a community. It’s so nice to see people invite strangers into their home to come together for music. To all house show hosts of this tour, thank you so much for your many kindnesses, for inviting me into your home and for doing what you do! There were a couple of firsts on this tour for me… First show in a yurt, first time touring without red boots, first lobster eaten (it was great), first second lobster eaten (this time in mac ‘n cheese). The most amazing first though was that I got to drive a car for the very first time in my life. Denis, who’s been behind a wheel since he was ten years old, could not believe that I’d never driven a car and treated me to a driving lesson. First on a large parking lot and, on the next day, on the OPEN ROAD. Denis, you are a very trusting human and an absolute hero. It was really fun and, despite what people have been telling me, exactly like Mario Kart. For your amusement, here’s me behind the wheel


So America, thank you for having me back. According to my VISA, I will be an Alien of Extraordinary Talent up until April 2018, so I very much hope to be back and play for you again soon.