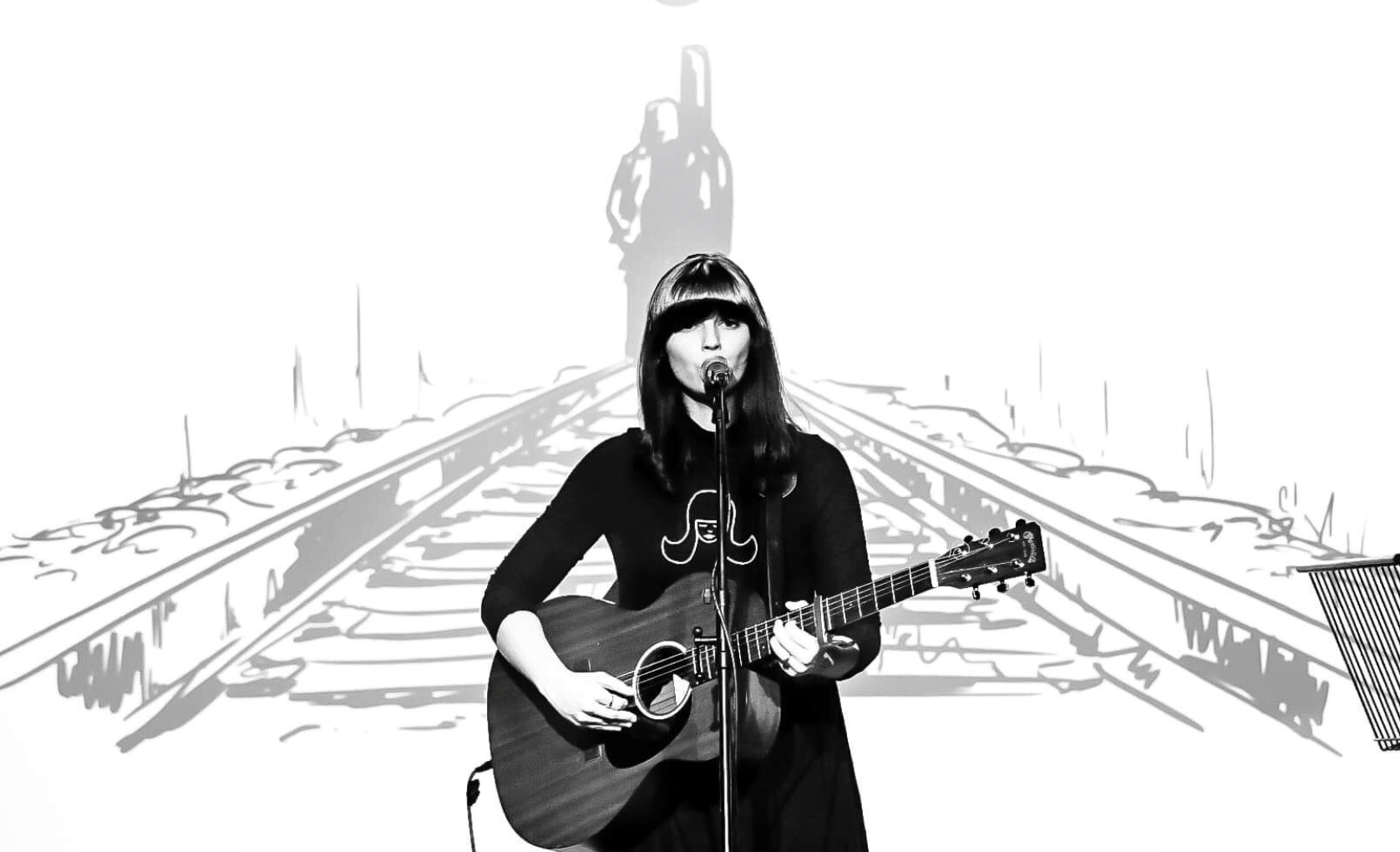 The title is tradition, although for a second there I thought “2018 and what it did with me” may have been more appropriate. When the world spins toward an ever more tense future, our personal lives sometimes seem to follow suit (we had a ‘Good-riddance 2018 / Survivor themed NYE party). So I’d like to propose a New Year’s resolution: No matter what comes our way, let’s try to be our best selves and keep moving forward. I really can’t wait for 2019 (well, it’s here already!), but before I jump into the New Year, here are my sparkly moments of the past 12 moths. 2018 started with a crowdfunding campaign to manufacture my first book, ‘Tales from the Rails’. We hit the target in just a couple of days thanks to you! The book is an annotated collection of stories from my tours and musical travels of the past years, ranging form musings on my first open mic nights in England through to performing at Glastonbury. It was weird and great to relive some of those adventures and to learn from my former self that I have, in fact, not been messing about. Ever. I’m so thankful to all of you who have bought and read the book and eternal special thanks goes to my friend and amazing artist James Gardiner who lovingly illustrated every chapter. I’ve spent this year being surprised chatting to you after shows, thinking: “How do you know that about me?”, only to remember that I’d published and shared all those gritty and shiny moments with you on paper.

To celebrate the launch of the book, I played a full band show at The Lexington in London. Looking back, that gig definitely sits at the top of the golden memory pile of the year. I’m not sure how it worked out so well in the end (I was already contending with a broken ankle and was nervous as it was the largest headline show to date). I still can’t believe we managed to fill the venue on a Monday night and am really touched when I think how many of you came along to support! I love playing with a full band – more of that in 2019 for sure. I had the amazing opportunity to open for Marillion in Reading, York, Gateshead and Liverpool. I don’t think I’ll ever forget those shows filled with firsts, from playing in 2000 cap theaters, to wearing in-ear monitors, to maneuvering stages and backstage halls on crutches, to meeting so many lovely people who have already gone on to become great fans and mates. Thank you Mark (who plays keys in Marillion) for inviting me on the tour! After that tour, I got to play shows in Glasgow, Leeds, Portsmouth, Birmingham, Bristol, Liverpool and Manchester. They seem a beautiful blur of sharing new songs for the first time (teetering that fine line between harnessing strong emotions and letting them overwhelm), drinking whisky and chatting in your living rooms, listening to music in the car with guitarist Matt (I concede that Father John Misty is in fact a great songwriter and reaffirmed that Mike Skinner is a genius), sitting on windowsills overlooking strange cityscapes late at night, and cradling paper coffee cups on trains.

Liverpool featured loads in 2018. It just never disappoints. A favourite show of the year was Folk On The Dock’s Festival on the Albert Dock. Huge thank you to Marina for inviting me to play and for introducing me to Janice Long, who hosted the main stage. It was a rainy day in August, but Janice’s introduction and the crowd’s heart-warming reception made this a red letter gig. I have a vivid image in my mind of your smiling faces under umbrellas, defying rain. I can also still hear Matt leaning over just before we played Run to say “Dude, we’re nailing this”. His words, not mine. The show at Portsmouth Guild Hall was special too. I was super honoured to have been invited to play the very first show in the new venue within the Hall. it was so much fun playing on that great stage, with a massive screen for my new visuals behind me, it’s easily one of the best venues I got to play at this year. Let’s do this one again soon, shall we? What stands out to me looking back on those shows is how lucky I am to have a strong group of lovely people who connect with my music and support me: that’s you! Some of you come and see me EVERY TIME I play in your town, some of you travel crazy-distances to come to my shows and some of you have even made your own RDB T-shirts. I am truly touched and can’t wait to share new music with you and hope to see you all again soon!

I didn’t stay away from Merseyside for long. In November, I got to host a 50 Year celebration show of The Beatles’ White Album together with Graham of Liverpool Acoustic and my signer / songwriter mate Thom Morecroft at Leaf. We invited our favourite local artists (well, mostly local, some came from as far as Berlin!) to play through what’s arguably the most challenging Beatles record. There were so many amazing, unique performances and I’m really happy to have been a part of it. We raised £400 for ‘Play For Progress’, a charity that brings music into the life of unaccompanied Refugee children in the UK. The Long and Winding Road that leads to Studio 2

As we’re still in Liverpool, let me take a minute to veer away from a strict telling of my own musical highlights and talk about how I was under a massive Beatles star all year long. In the summer I won (yes, won!) a ticket to see Paul McCartney perform at Abbey Road Studio 2. He was filming his Spotify session and I was in the front row in my sister’s sparkly top. I never imagined I’d be able to experience this, two hours of the songs I’ve built my life around, performed right in front of me. In his interview with The Times, Paul McCartney said that he still feeds off the audience, such as “the young woman in a sparkly dress pogo-ing to A Hard Day’s Night at Abbey Road”. So, with that reference, I reckon I’ve peaked and can now gladly retire. Thank you Paul! And because that wasn’t quite enough.. When I saw Paul McCartney again in December at the O2 (yeah, I know..!). Ringo came on as a surprise guest and played drums on Get Back, before he wished us all a Merry Christmas and a Happy New Year (Peace & Love).

Where it comes from and where it goes 2018 was full of writing new songs, as well as being inspired by other people’s music. I’ve never been to say many live shows as I have over the past 12 months. Non-McCartney highlights included Patti Smith making me feel like I can change the world, Jarvis being Jarvis, The National allowing me to feel all, Mike Skinner reminding me to be brave and clench fists and Tame Impala, Flavien Berger and Nick Cave sprinkling waves of fun, vibe and energy into my somewhat chaotic year.

On a more organised note and between all the soaking up and writing of music, I curated and hosted two FM2U music conferences in 2018, one in London and one in Glasgow. The idea behind FM2U is to bring artists together to learn from one another so that we can support each other and to put a positive artist voice out into the wider music community. This year, I was super grateful to have amazing artists such as Stuart Braithwaite (Mogwai) and Jeremy Pritchard (Everything Everything) take part, as well many more brilliant artist and music people who’s work I admire such as Kimberley Anne, Bryde, Rookes, Eckoes, Rosie Bans, Jake Morley, Lisbee Stainton, Chris T-T and many more. I get so much out of these gigs – hugs, wisdom nuggets, and in the case of Glasgow, lots of free whisky and of course Iron Brew. The music I currently have out in the world made waves in 2018 (radio waves!). After meeting at Folk On The Dock’s, Janice Long went on to say some incredibly nice things and has played my songs on BBC Wales loads since. Unwind and The Painter also got a lot of love with repeat plays on Chris Hawkins’ BBC 6 show and on Gary Crowley’s BBC Introducing. Thanks also to Lisa Gwilyn for the massive feature / interview on your BBC Wales show and to Clash Magazine for premiering the live studio version of RUN that I recorded at Middle Farm Studios. It was great to end the new year with an online show to thank you for your support and to share some of the new songs with you – from my sister’s kitchen in Berlin surrounded by a smattering of family and friends to all of your screens! I was so touched by your comments and amazing feedback on the new stuff. It was an honour to have my Dad join me on a couple of songs too. You tuned in from across Germany, the UK and America and that’s pretty amazing!

I’m still shaking off the holiday dust and can’t believe this is happening so soon… but I am off to Glasgow on January 27th for a show at Celtic Connections and then I’m playing a full band show at Kings Place in London on February 7th! We’re playing Heirlooms & Hearsay in full, followed up by some new songs and some old ones for good measure. This is going to be a big one (my biggest headline show yet), so come along and let’s raise the bar together! You can get your tickets here.

Shortly after that, it’s off to Canada to perform at Folk Alliance (kind of like SXSW for acoustic music…with lots of banjos and fiddles) and a tour of Ontario (in February…who’s idea was that, ey?!). I’m working on a new record before and after, so keep in touch for updates!

Thank you for reading this and making it through to the very end (of this post and of 2018!).

Earlier in the year, at a moment when I was low, my Dad advised (as he often does), “let yourself fall into the lap of the audience” and that I did. Thank you for catching my emotional stage dives this year. I don’t know what I would do without you. 2019: Bring it!