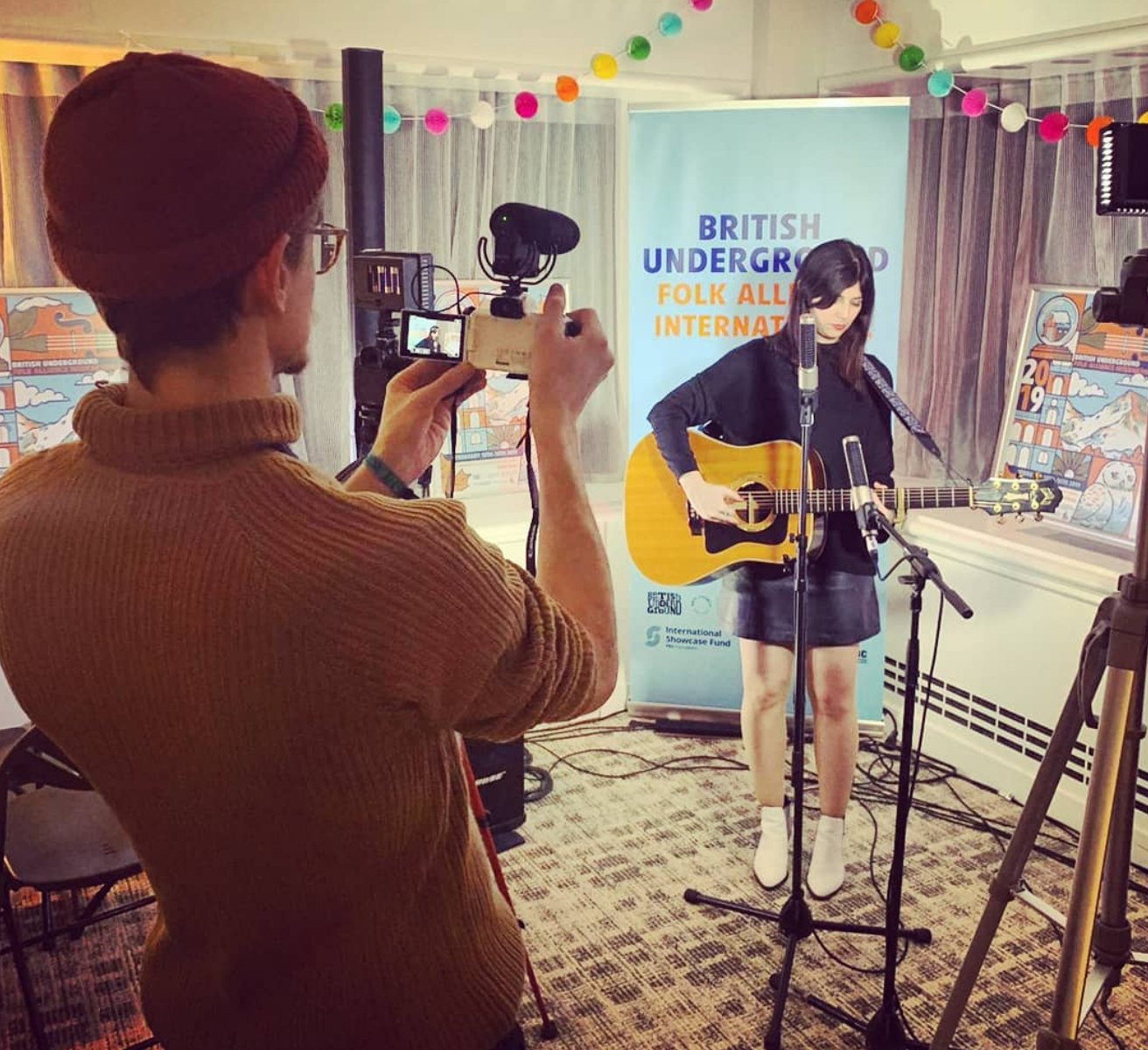 I hadn’t quite realised how much I’d missed being tired and singing every night. It had felt like an eternity since I’d been on a proper adventure tour like this. The kind of tour where you have no idea what to expect from day to day, what the venue will be like, what the audience will be like, where you’re staying and whether or not there will be cats to cuddle. The sub-zero Canada tour kicked off with four days of performing at Folk Alliance International, a music industry showcase and networking event for folk, roots and acoustic music. It’s quite a challenge to aptly describe the insanity of this event. It all takes place in one hotel (this year it was held in downtown Montreal), which is taken over by 3000 folky delegates. Larger showcases take place in conference rooms throughout the afternoon and smaller ones are held in actual hotel rooms across three different floors from 10pm to 5am. Some rooms have had the bed removed and are equipped with a PA , others simply have chairs crowded around the bed, the performer snug in the corner, performing unplugged. At any given point between those hours, there are about 150 shows going on at once. That’s a lot of songs and that’s a lot of energy. The corridors become a stream of musicians negotiating upright basses, guitar cases, hats and whisky hidden in coffee cups. There’s a definite Fear and Loathing vibe about it, just with fiddles and banjos. I performed seven times across those four days and recorded one live session (which I’m looking forward to sharing with you soon). Highlights were getting everyone to join in with robotic harmonies on my new song ‘Molecules’ (helps having about five musicians in every room at any given moment) and playing Martha Wainwright’s ‘Blood Mother Fucking Asshole’ in the Momentary Love Management Showcase Room as part of the Canadian songwriter celebration on the final night. Another definite highlight was the Beatles sing-along I hosted on Friday night from 3am – 5am in the Black Oak Artist’s room (of course that was something I was going to say yes to when asked). The session featured some amazing impromptu renditions with a harp and an actual string quartet. On all four nights, I loved walking to my hotel in the early hours, beautifully crisp air guiding me down snow-covered streets. I’m not sure what this Folk Alliance will bring me (after the last FAI, I started working with the wonderful Denis Grabill of Black Oak Artists, who’s since booked two US and two Canada tours for me), but I definitely got to meet a lot of amazing musicians and music people and the rest, time will tell. If you want a folky-fix, some of my musical highlights included Jellyman’s Daughter, Hayley Reardon, Jake Morley and Teghan Devon. Special thanks to Lou DeMarco, Denis Grabill, British Underground and Candace Shaw for having me showcase in your rooms.

THROUGH THE ICE AND SNOW On Sunday morning, while the hotel lobby was heaving with hungover musicians scrambling to check out in time, my touring buddy Megan Palmer and I climbed into our little rental car and made our way to the first show. In a way, it felt good not to stop, still in a daze of late night singing and impossible schedules, might as well keep it going for a little while longer. We had one week’s worth of shows to play across Ontario and Quebec. Megan Palmer is a singer songwriter, originally from Ohio, but based in Nashville. We got teamed up for this tour by our US booking agent and hadn’t met until Folk Alliance – sort of like a musician blind holiday. After the first hour’s drive which took us to our first location, a house show in Russell, I had no doubt that it would be great sharing the week and getting to know each other and our music. It’s a funny thing pairing up two people who turn feelings and impressions into songs for a living. We both write music that’s quite personal and that tells a story. Emotions were high at the first show and there was a point when we and the audience were all tearing up. A cathartic evening of sharing songs with lovely people after the whirlwind of experience of the last days.

Kitty and Dan were amazing hosts and kindly put us for another day after the show. It was quite something, being part of a warm family for a day in a beautiful house surrounded by snow. It was sweet being called down for dinner along with their kids.. It was -14 degrees centigrade when we left Russell. When we arrived in Wakefield, we couldn’t see the house we were staying at for all the snow. Our gig was hosted by Megan’s friend and old band mate Luther (of Luther Write and the Wrongs) and was taking place at La Hibou. The show was good, but what I’m taking home from Wakefield are memories of hanging out with a bunch of musicians and excellent humans, playing and listening to music together until the wee hours. And the snow. I’ve never seen that much snow in my life. The first two shows were in such rural, snowy places, that when we arrived in Kingston, Ontario I was almost taken aback by high streets, buildings and people. La Musiikki is a music venue that specialises in Whisky and coffee… so really you couldn’t have found a better match for me. Kingston is a university town and the audience was great, building from sound technician and two people five mins prior to show time, to a packed room throughout the night. We ended up playing a marathon three hour show. It was fun. I was very ready for sleep when we finally hit the pillow at 4am.

The final shows were at the beautiful Old Church Theater in Trenton and a lovely house concert in Guelph. Audiences throughout were super attentive and kind, but the final house show takes the prize for being the most ‘up for it’, singing along to our songs unprompted and making this show a super worthy grand finale.

I love dipping in and out of universes and collecting people along the way. That’s what touring is really: every day you travel and nose-dive into someone else’s life, staying in someone else’s home and hanging out with a different cluster of friends and family. Some you leave behind and never see again, treasuring the memory of deep conversations over empty wine glasses with generous hosts. Others you collect and revisit, building an eclectic international tour family made up of musicians and music lovers.

Avril Lavigne blasting out (insert Canadian accent) of the car radio speakers as a ‘Car Canada’ taxi overtakes us on the snowy streets? Check.

Watch a curling match and drink Canadian pale ale on your day off? Check.

Have people apologies to you lots for no apparent reason? Check.

Friendly, laid back people smoking weed out on the streets? Check

Sitting by a log fire while it’s snowing outside? Check.

Moose sightings? Nope. Not a single one. I left Toronto and its ice winds behind and landed in sun soaked London on the warmest February day in our recorded history. It was nice to come home to see posters for Black Deer Fest up across town.

This is me, pointing at me! Now it’s time to record the new songs and then play some Festivals. My next show is in Liverpool on March 30th at BBC6 Fringe Festival. Thank you to everyone who came along to the shows in Canada, who put us up, hosted a show or helped in any way. I will be back to see a Moose.

4 Replies to “Canada Tour – the ice wind, the snow and the warmhearted folk”