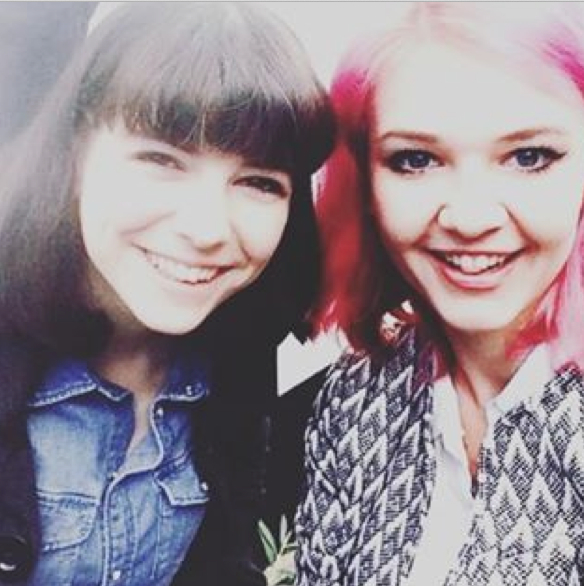 I’m in Wales and, for the first time this week, in a really good mood. The sun is out and I’ve just walked through town with guitar and suitcase in tow, the noise of the wheels rolling along on the pavement a gentle reminder that I love touring. I’m performing at Gwdihw in Cardiff tonight (and have just learnt how to pronounce it). The venue looks really cool and I can’t wait. For now, that’s exactly what I’m doing – waiting, with a cup of coffee and an open wifi network.

The previous show has yet to be written about. I had the pleasure of performing in a tiny chapel in Newbold on Avon last Friday, promoted by Dutch Van Spall of Folk on the Water (See whay they did there..). At that point, I was still really unwell and struggled through the country, from Liverpool, to Birmingham, to Newbold on Avon. After a glorious tour dinner (pot noodles and Lemsip), I felt a bit better and ready to sing. The little chapel was full, the light dimmed and the cross behind the stage reminded me of a spinal tap prop. The evening was a songwriters in the round format, each performer doing two sets of three. I really enjoyed local band Speak Brother, lovely three part harmonies. I felt very lucky to be a part of that night and was pleased I could make it. A late train took me back to London that night… thank you to Dutch for putting your heart into promoting live music in places where there isn’t much of it. Independent musicians like me need promoters like you!

Time is a funny thing. In my blog, I have the power to bend, stretch and spin it around as I see fit. In reality, I’m sat on a train (story of my life!) en route to Liverpool, where the last show of this particular tour will take place on October 1st at the Well Space. For now though, I’m back in that coffee shop in Cardiff and a couple of familiar faces are coming in through the door opposite to where I’m waiting. I’m chatting, tuning up my ukulele and watching the support act, Ellie makes music, play her songs in that great, opening tuning – open G, I think, but I cant be sure… It was a relatively small crowd in Cardiff, but a really lovely one, including one person who had seen me play in Arezzo, Italy last year and had just moved to Cardiff (the world is so small!). Thank you to the amazing cushioned front row for making the show so fun and to the lovely pink haired Jo, for having me.

The next morning, Cardiff was showing itself from its sunniest side as I walked through the typical pedestrianised shopping street, passed the not so typical Castle to meet with the crew from Made in Cardiff TV. We filmed a couple of my songs for the busking show, which should be going out in a couple of days, I’ll post the link as soon as I have one.

From Cardiff, to Farnham, on the train. Today I was due to play a living room show at Huxley House gig together with my friends Jess Morgan and Chris Simmons. I was super pleased to be part of that line-up! I love playing living room shows and Huxley House can definitely pride themselves at being fantastic hosts. It was a really nice surprise to see some audience members there who had seen me perform at Lodestar Festival and decided to try their first living room gig experiencee! Thanks to Andrew and family for having us play and stay in your beautiful house. Sincerest apologies that I wasn’t on top form and had to go to bed early. I did stay up long enough to capture us three singer songwriters together though! So back to the actual now, to coach A of the virgin train service where I’m sitting in my usual seat. Soon we’ll reach the first stop, Stafford. Between the last paragraph and this one, I was in Hamburg for four glorious days of Reeperbahn Festival Madness, but that’ll have to wait for the next blog post, on the next train ride, which won’t be long, I can promise you that! Thanks for reading my tales from the rails and for being so supportive and sweet. Take good care of yourselves (says the person who’s been ill and on the road all month!). I’m much better now though, so not to worry!